You are here: HomenextNewsnextWorcestershire's milestone 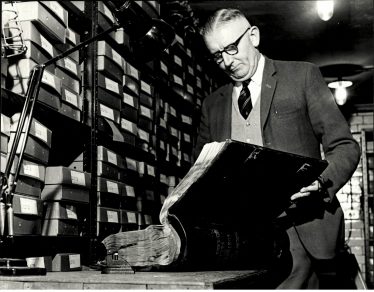 Worcestershire Archive and Archaeology Service has reached, and celebrated, a significant milestone.  Worcestershire County Council appointed its first County Archivist, Harry Sargeant, in April 1947.  In his first report to Committee he wrote:

I started work at the Shirehall on the 1st April 1947, and since then have been working to a programme which I drew up tentatively in February 1947.  After three years I have not deviated from it.  The first phase – the Inventory of the contents of the muniment rooms – is now finished, and the bulk of its contents now known and can be easily found.

The approximate number of documents examined in bulk is 450,000, which represents the extent of three muniment rooms on the 31st March 1951.  The inventory is being added to all the time since new accessions have to be dealt with when they arrive.  Only the final arrangement of the archives on the shelves remains.  Detailed cataloguing is now in progress, and the first collection selected for treatment is the Berington Collection of family archives dating from 1289.  This is one of the most valuable collections in the Record Office, and consists of some 10,000 items: work on these will occupy staff for some years.

Seventy-five years on and staff are still cataloguing that collection! – No, sorry, that’s a joke! But staff are still cataloguing collections – we get over 100 new deposits of records every year – and making them available for research in the public searchroom, now based in The Hive.  We recently opened up Accession number 16670 and are slowly filling up our 12 miles of shelving!