zoom
Friends committee at the Ludlow History Day, October 1999 Pat, third from the left with Bob behind.
Courtesy of Shropshire Archives 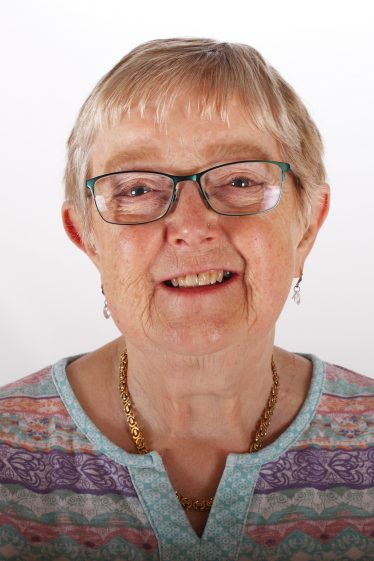 Last year AWM lost a dear friend and valued trustee.  The below has been reproduced with the kind permission of the Friends of Shropshire Archives.

This year the Friends of Shropshire Archives lost a great friend, founder member, and supporter as well as the person who had been our treasurer since 1994.  Pat housed a large personality in a small frame.  She was always a significant presence at Friends events ensuring subscriptions and fees were collected, and expertly encouraging new members to join us.  We will all miss her enthusiasm, commitment and professionalism, which she continued to demonstrate until her final illness made this impossible earlier this year.

Pat was born in Hackney Hospital on 11 May 1946 and brought up in Stoke Newington, London an area where most of her ancestors were from.  She worked in a variety of roles in the civil service.  Her interest and experience in managing finance started when she was the treasurer for a barbershop chorus for many years and when she worked for the Inland Revenue.

Pat also always had a great interest in singing, mainly folk song and ladies barbershop, to a very high standard. She met her husband Bob in September 1973 at a folk song club in London.  They started folk dancing within a few weeks of meeting when Pat was invited to be the resident singer at the London University Folk Club where they also danced.  Folk dancing remained an important part of Pat’s life until the lockdown in March 2020.  Pat and Bob and married in February 1975, they have two daughters and four grandchildren.

Pat and Bob moved to Shropshire in 1988 following the needs of Bob’s work.  Their interest in family and local history led them to join the Friends of Shropshire Archives when it was founded in 1990.  Pat was only the second Treasurer the Friends have had since their foundation.  The successful management of funds, including for fundraising appeals, and ensuring correct returns to the Charity Commission, were all achieved thanks to her efforts.

A valued and humorous friend

Pat’s other interests included foreign travel.  She and Bob were able to travel to many places in Europe as well as to Canada, China and the Far East.  She also a very skilled cross-stitcher and produced many beautiful works of art for family and friends.

In 2017, following my encouragement, Pat became treasurer of Archives West Midlands, a charity which supports archive services across the region.  We travelled regularly to meetings in Birmingham together.  One of my strongest memories of Pat is enjoying our conversations on the train about all sorts of things and people.  Pat always had an opinion and wasn’t afraid to express it, and she had a great sense of humour.  I will miss her company that made those journeys pass so quickly.

I am very grateful to Bob, Pat’s husband, for help with this article.  Pat’s family have set up a Just Giving page in Pat’s memory with all funds going to the charity Melanoma Focus. https://www.justgiving.com/fundraising/pat-kiernan