You are here: HomenextWest Midlands' ArchivesnextMedia Archive for Central England 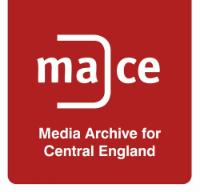 The Media Archive for Central England (MACE) is recognised as the specialist public film archive for the East and West Midlands. Our aim is to make film, video and digital materials of the region as accessible as possible. To do this we collect, preserve and document moving images of the region as well as those filmed by people from the region, so we can better understand, appreciate and enjoy the history and culture of the Midlands.

MACE is an independent company and registered charity that is supported by the University of Lincoln where we are based.

We are one of nine English regional film archives and although we are all independent, we work closely together. We also have links with the UK’s national film archives at the British Film Institute, the Imperial War Museum and the National Libraries of Wales and Scotland. Together we have created a rich national film collection that is being preserved for people to experience now and in the future. MACE is also closely connected with the county record offices across the Midlands for whom we act as the specialist repository for moving images held on film, video and digital formats.

We were one of the first archives in the UK to be accredited under the National Archives Accreditation Scheme and we are a designated Place of Deposit for Public Records.